Automotive mould refers to mold used in the automotive field, and is known as the “mother of automotive industry”. More than 90% of parts in automotive production rely on mold forming.

Generally, it takes more than 1,000 to 1,500 sets of stamping dies for a car, which accounts for about 40% of total output value of the entire car. There are about 800 sets of plastic mould, about 300 pairs of sheet metal mould and about 100 sets of die-casting mould. Automotive stamping mould are important technological equipment for automotive production. Their design and manufacturing time accounts for about 2/3 of the whole automotive development cycle, which becomes one of the main constraints. Automotive stamping dies have the characteristics of large size, complicated working surface and high technical standards, and belong to technically intensive products. 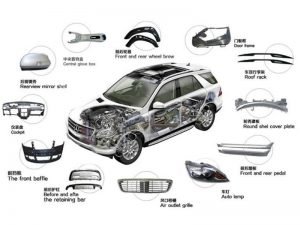 According to category of cover parts and requirements from automotive manufacturer, the automotive cover mould can be divided into three grades: low end, middle end and high end. Among them, mold with low technical content have been oversupplied, and the market profit margin is narrow; the competition in the mid-end mold market is becoming increasingly fierce, and high-end mold with high technical content are far from meeting the market demand and have huge development space. 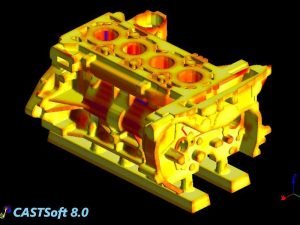 The quality and performance of mold material is an important factor that affects quality, life and cost of mold. Ductile iron has good toughness and wear resistance, welding performance, workability and surface hardening performance. Moreover the cost is lower than that of alloy cast iron. It has been widely used in Hafo Mould’s mold design.

The multi-position progressive die can complete multiple stamping processes for parts, including punching, bending, drawing and forming with partial separation and continuous forming. The mold must have high-precision guidance and fixed distance system, and equipped with automatic feeding, automatic output, safety detection and other devices. While the mold structure is complex, with many inserts, high mold manufacturing precision, difficult manufacturing and assembly process. It is an important representative of technology-intensive automotive mould.

With the advent of electric vehicles, driverless technologies and new energy vehicles, energy conservation, environmental protection and artificial intelligence and vehicle networking technologies are become increasingly important in the automotive industry. The rapid development of new energy vehicle market led to an increase in new models, which has brought huge market opportunities to the mold industry.

As new energy vehicles emphasize reduction and efficient use of energy, lightweight materials have great potential in the market. For example, TESLA Model S, 95% of body structure parts are made of aluminum alloy, Enough to see the application of new materials in light weight have become one of the core technical directions in the future especially development of lightweight metal forming, polymer material forming, and composite forming.

At the same time, with rapid development of vehicle networking technology, continuously improved electrification and intelligence degree, automotive electronic mold have also ushered in a broader market space. China’s automotive electronics mold companies are actively deploying car networking services and key components and high-value-added products such as integrated circuits, forming synergies with the automotive electronics industry. Under the background of the rapid development of new energy vehicles and smart cars, enterprises that can use mold to manufacture Intelligent Driver Interactive Vehicle products, high-end functional assemblies will have huge development space! 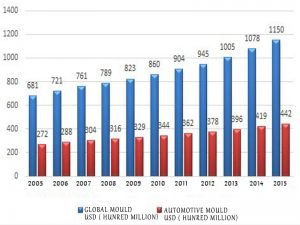